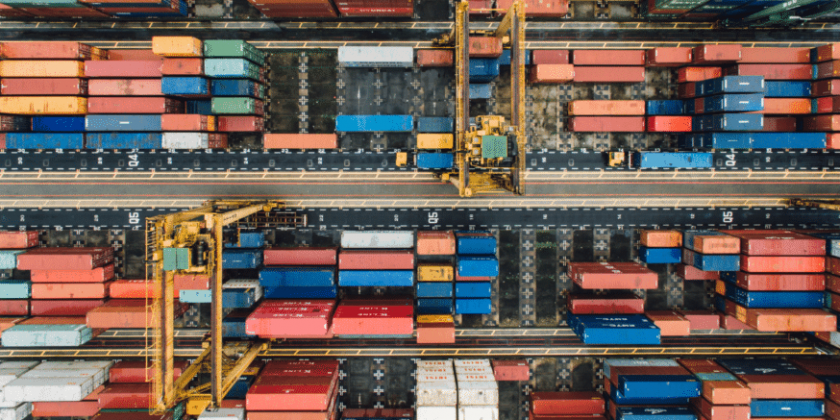 Cryptocurrencies are fun, exciting, and easy to understand, so they’re getting the most coverage in the blockchain revolution. However, the underlying blockchain technology is already getting tested in dozens of industries, from agriculture to energy to art. Blockchain shipping and freight is another new development. It’s poised to change the entire chain of custody for how the goods we buy get from place to place.

A blockchain shipping future could change several paradigms in the current industry. Blockchains could manage the complexity of a global trade network by establishing a single, transparent source of truth. From there, a blockchain shipping industry would encourage competition, efficiency, and fewer errors. This article looks at how shipping is poised for massive change.

Previously, containers came in many different sizes. They often had to be unpacked and repacked any time there was a transfer. With the invention of a standardized corrugated metal container, there was no need to unpack at each transfer point. Goods could easily be kept dry inside the containers. Also, these containers could stack atop one another for increased density.

The intermodal shipping container created a protocol for the shipping industry. The change was revolutionary. Shipping became much more efficient. Additionally, transfers between carriers became simpler and started to follow predictable procedures. It was easier to track a standard container than it was to keep track of a haphazard shipment.

Blockchain as a Protocol

The same level of disruption in the shipping industry could come from a new protocol. Like the shipping container, blockchain could make operations more efficient, standardize transfers, and allow senders and recipients to track their orders in real time. This makes it an exciting time for blockchain shipping.

Many of the major companies in shipping and freight have joined the Blockchain in Transport Alliance. The goal is to create standards for the new blockchain shipping industry. These companies have recognized blockchain’s potential and the viability of this use case in their industry.

A blockchain shipping industry could rely on blockchain technology to keep a record of the Bill of Lading and a shipment’s transfer history. When a transport company signs for a shipment, accepting the shipment for further transport, it could be recorded to the blockchain. In a transparent system, that blockchain record is then available anywhere in the world. Someone awaiting the shipment could see information about which company is transporting the item at the moment and where they last signed for it.

When something goes wrong with a shipment, it can often take valuable time before the sender or recipient finds out about the problem. Often, shipping agreements can be complex. They may be bundled together or subcontracted to the point where the company currently in charge of the shipment doesn’t know anything about the person who paid for it or where it’s ultimately going. That means they don’t know who to notify in the event of a problem.

With a blockchain shipping solution, all parties could see the whole chain of custody. In the event of a problem, you could follow that chain to identify where things went wrong and send a replacement or order the return of the shipment while it’s still in transit.

Shipping route speed is another huge opportunity for decentralization and a blockchain shipping economy. Instead of taking inefficient routes while shipping companies try to fill up large shipments on their trunk lines, smaller companies could bid on legs of a journey. They could deliver your package more directly, instead of following the current hub and spoke model of delivery.

Blockchain shipping also opens up the possibility of a decentralized marketplace for shipments. Right now, starting a shipping company requires a lot of overhead and upfront costs. In a blockchain system, smaller operators will be able to bid on contracts for certain shipments. This introduces greater flexibility into the entire shipping industry.

One application where blockchain really shines is certification. It’s possible that blockchain, in combination with IoT, could power an automated service for certifying delivery, tamper protection, and the authenticity of a shipment’s contents. This type of certification means that you could be certain that a shipment will arrive once you’ve placed an order. Right now, you have to place implicit trust in the shipping company to deliver your package safely. In the blockchain shipping future, smart contracts could guarantee timely delivery or automatically refund you or send a replacement.

Shipping efficiency, trust, and safety could change dramatically. Blockchain shipping would mean greater transparency, competition, and assurance so that shipments make it to their final destinations. The shipping industry will be expected to create a standard for greater efficiency and a single source of truth.

This article by Bennett Garner was originally published at CoinCentral.com

What is holding back blockchain in the shipping industry?

We identified three barriers to a blockchain-based application in maritime logistics. In practice, these barriers prove the unfitness for blockchain as an all-round solution for current problems in the industry. Read more here

We are hiring! Will you revolutionize logistics with our team?